Māori tattoo : History and origins of an ancestral Polynesian art

The origins of the Māori tattoo

The word tattoo is derived from the Tahitian word Tatau, which means ‘to strike’ or ‘to hit’. Their precise origins are unknown, but Māori tattoos can be found all across the Polynesian Triangle, with examples ranging from the Cook Islands and French Polynesia (with the exclusion of numerous islands south of the Australs and east of Tuamotu) to Hawaii, Samoa, Easter Island, and New Zealand.

In the distinctive language of the Marquesas islands a Polynesian tattoo is described as ‘E Patu Tiki’, meaning ‘in order to strike an image’ and is recognised as the place where the most extensive and ornate designs have been found.

According to the origins of Māori tattoo art, they were seen not just as decoration, but also as a language, a symbol of power, and a mark of honour in traditional Polynesian society. They also held a sacred importance as they were thought to possess magical abilities inherited from God. Polynesians therefore used tattoos to distinguish themselves, displaying their social status, rank, geographic origin, familial history, courage, and power. All of this data was etched into the facial skin (a moko) and the body and served as a kind of identity card for each person.

A tattoo could also mark the accomplishment of important social rituals such as the passage from childhood to puberty, marriage, etc. In addition, an image could represent remarkable events in the life of the person concerned such as acts of bravery in war, prowess as a hunter or fisherman, or simply as a decorative feature on the skin.

The types of Māori tattoos

There were three types of tribal tattoos: those for gods, priests, and princes, which were hereditary and thus reserved for their descendants; those reserved for male and female chiefs; and the third type which were reserved for war leaders, warriors, dancers, and rowers.

Some of the designs were intended to keep individuals from losing their mana – the divine power that is responsible for health, balance, and reproduction, as well as to combat evil forces. In Marquesan Island culture tattoos were not only a privilege, but also a must, providing a bond to the sacred memory of their ancestors and had a far-reaching impact on people’s lives. And because it was indelible the work would eventually bear witness to their origins, rank, and valour when they were summoned to appear before their forefathers, the gods of the fabled land of ‘Hawaiki’ in the afterlife.

In 1819 Polynesian tattooing was outlawed across the islands with the introduction of the Pomare code when missionaries converted the king to Catholicism and much of its tradition was lost. It saw a revival in the 1980s, and whilst the religious pressures disappeared, the more fundamental symbolic force remained: to permanently imprint a story, a memory, or an event on the skin.

Polynesian tattoos are now more than ever a way to assert one’s identity and demonstrate a commitment to the Polynesian culture with tattooists developing their art to reproduce traditional motifs, decorative motifs (such as dolphins or manta rays) and most recently to create motifs which are completely new yet directly inspired by tradition.

How a Māori tattoo was created

In the Society Islands, tattoo artists were known as ‘tahua’a tatau’, while in the Marquesas, they were known as tuhuka (or tuhuna) patu tiki. It was their mission to leave an indelible impression on each member of the community at every stage of his or her life.

The artists had to be able to impart their knowledge with remarkable skill because their craft was frequently passed down from father to son.

The techniques of Māori tattooing

Sharp combs made of bone, tortoiseshell, or mother-of-pearl, fixed to a wooden handle, were used in conjunction with a mallet.  The teeth of the comb were soaked in ink based on charcoal from the candlenut (Aleurites Moluccana) plant, diluted in oil or water. The comb’s number of prongs was determined by the quantity of surface area to be covered.

There could be two to 12 prongs, although some people claim to have seen as many as 36. The artist would use a charcoal stick to create the design on the body before applying his ink and the tattooing ceremony became a solemn ritual performed to the rhythm of drums, flutes, and conch horns. For some families it was expensive with pigs, war mallets, tapa (painted bark fabric), and whatever else the family owned being used to pay the tuhuka. As a result, many people on the lowest end of the social range couldn’t afford many tattoos.

Human bodies and faces on the Marquesas Islands could be completely covered in tattoos, distinguishing them from those found in Tahiti and the Leeward Islands where it appears the face was never tattooed.

According to custom men generally wear Polynesian tattoos from their upper knees to their lower back whilst women usually wear tattoos on their hands. The placement of the tattoo also depends on the person’s family and occupation. A Masseuse, for example might have her hands tattooed or a teacher would get a facial tattoo, also known as a moko, on their lower lip. Popular patterns on the arms, legs, and shoulders were abstract and geometric designs in the form of circles, crosses, and rectangles, as well as figurative animals and plants.

Each symbol has a mean, examples include:

Human figures, known as ‘enata’ in Marquesan, were used to represent people or relatives within the tattoo. The symbol can represent a man or a woman, or divine figure, and it has meanings that are related to humanity and relationships. When enata forms a pattern, it resembles a group of people holding hands – a row of enata in a semi-circular formation frequently represents the sky and the ancestors guarding their living relatives. If the enata were turned upside down, they could represent defeated enemies.

Shark teeth are extremely sharp and are characterised by triangles. They represent bravery and heroism. In many cultures, they represent a variety of things such as shelter, leadership, and vitality, as well as traits such as brutality and flexibility.

The spearhead is an ancient symbol of war, battle, enmity, and victory use to represents the warrior within you. It was a popular symbol in the tribe’s warrior class were an arrow pointing in the same direction denoted victory over the adversary. It is also said to represent protection, endurance, and even an animal’s sting.

The oceans are frequently thought to be a link between the visible and invisible worlds, representing the ebb and flow of life and death and hold a significant influence in various myths and cultures The ocean is a second home for the Polynesians, and like many cultures, it is a place of rest in the afterlife with the symbol of waves used to represent the ocean.

The tiki (the first human to become a worshipped ancestor) was a vital influence in the Marquesan style, representing a half-human, half-god being who is the ancestor of humans. It conveys strength and masculinity and also serves as a lucky charm, protecting the wearer from dangers and evil spirits. Tiki can also represent deified ancestors, priests, and chiefs who became semi-gods after death. They represent protection, fertility, and serve as guardians.

The turtle is a well-known symbol in Polynesian tattoo designs and the most important symbol of the tribe and family unity. In life, they represent immortality and composure and are a significant creature in Polynesian culture, where they are associated with virility, vitality, endurance, and strength.

Lizards have a wide range of connotations and significance in Polynesian culture. They are known to be resilient in the face of adversity, and thus represent a force that shields man and woman from evil and other omens. Men frequently summon gods (atua) in the form of lizards and geckos to serve as a means of communication between the gods and men. They are bringers of good fortune, have access to the spiritual world, and have the power to destroy.

The dolphin tattoo, like the stingray tattoo, represents freedom. In Polynesian mythology the dolphin guided the Māori to the promised land while protecting them from sharks. It’s an important animal for Polynesians because it represents protection and guidance.

Today Māori tattoo artists can be found on nearly all of French Polynesia’s major inhabited islands. Visitors come from all over the world because of their renown and the beauty of the Polynesian tatau. Tattoo artists from Polynesia can also be found in many major cities across the world as Polynesian tattoos have gained worldwide recognition for their traditional roots as well as their authentic ethnic appeal.

Eddy Tata, the resident tattoo artist on board Aranui 5

Aranui 5 is the world’s only passenger ship with a resident traditional Polynesian tattoo artist. Eddy Tata, who was born on the Marquesas Island of Ua Pou, joined the ship in July 2016 and began by tattooing the crew. He is now the ship’s resident tattoo artist.

He learned to draw while watching his uncle, Moana Kohumoetini, create tattoos, and at the age of 17, he began producing his own tattoos. He had completed the necessary training to become a tattoo artist on other people by the age of 30 and is now a well-known and highly sought-after Polynesian tattoo artist. In his on-board studio, Eddy creates ancient symbols and figures for passengers.

He sees his service as a way for travellers to remember their time in French Polynesia, as well as a way for him to use his talents to connect with people from all over the world.

Tata meets with the passengers on the cruise to decide on the design of their tattoos. These are based on their personal life stories, experiences, and emotions. While the symbols used may be the same, it is their combination that tells a unique story. Eddie tattoos 15 people per week and about 700 people per year between his private clients on land and passengers on board. 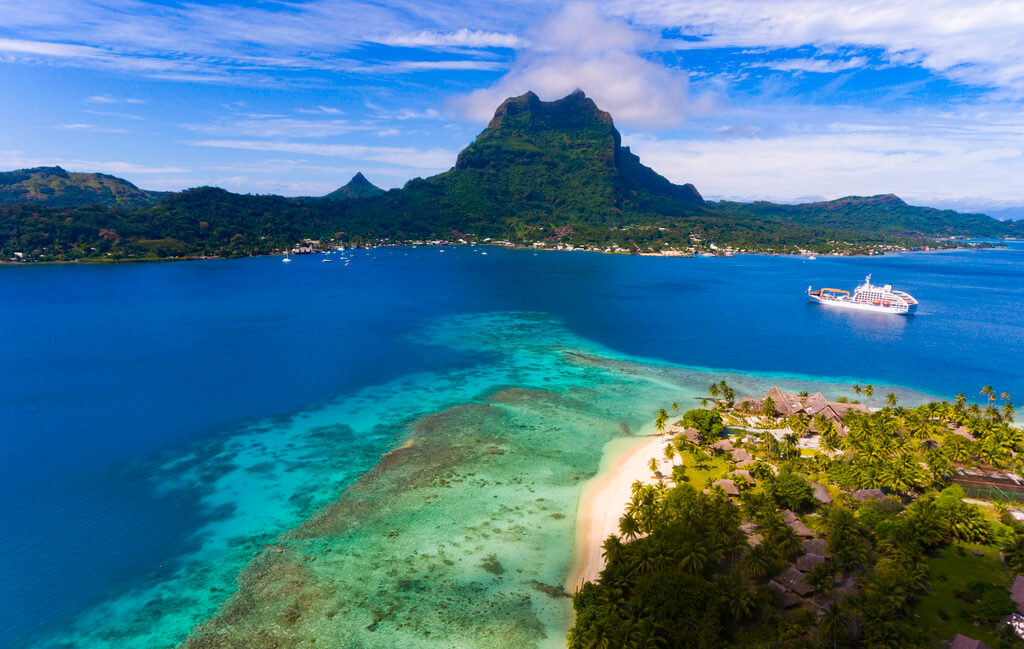 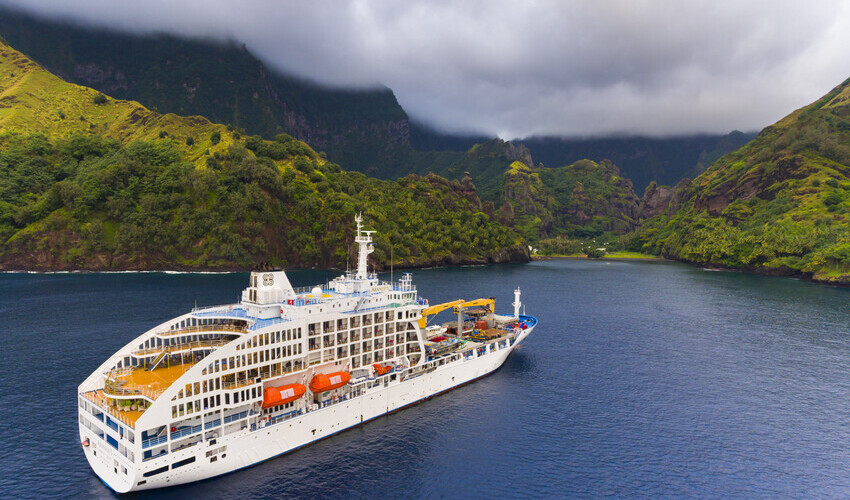 Fakarava: a Polynesian island paradise
We use cookies on our website to give you the most relevant experience by remembering your preferences and repeat visits. By clicking “Accept All”, you consent to the use of ALL the cookies. However, you may visit "Cookie Settings" to provide a controlled consent.
Cookie SettingsAccept All
Manage consent